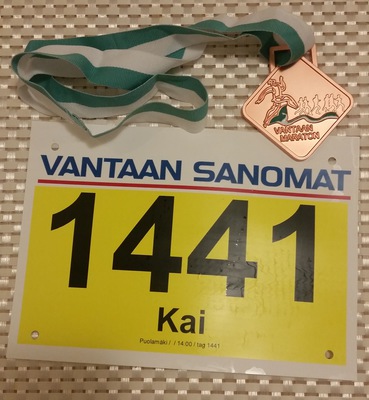 The route of the annual Vantaa Marathon event goes around our home. The starting area is just a couple of minute walking distance away from where I live. The event took place yesterday and it included full marathon, half marathon, and quarter marathon distances. I participated in the half marathon race (21.0975 km). Apparently there are quite a few runners living nearby as I saw lots of people walking to the start area from their homes.

There were lots of people cheering around the route and many musical performances as well, which is a really cool specialty of the event. The weather conditions were good as well, sunny, with light overcast, and temperature of around +10°C. The wind was quite strong and in some parts of the route chilly, though.

My run went well and felt good - and I still feel good today, even though the effects of running 21 kilometers at full speed are clearly there. My net time was 1h:40m:03s, which is my personal best - out of two half marathons I have participated in… - and placed me as 144th (22%) of 656 starters. I will probably participate in the next year’s event also.

I started running about a year ago from nothing, after getting tired of not-so-optimal fitness and back problems and such. Then I found that I really like running.

The past year has been a learning experience: I feel that I have learned something new every month. The races such as the one yesterday are a good way to motivate and schedule training and to benchmark the current level. I like to have a “program” instead of just doing something at random by the feel, at least for the most of the time.

The running is a very individual sport, even in races with hundreds of participants. It is funny that despite the crowds and carnival atmosphere of a race everyone is still running their own run in the bubbles of their own. And you can see that they like it. Even though it is a race, I suspect that the performance relative to the other competitors does not really matter for most of the participants, at least for those like me who are not close to the podium, so to speak.

One of the major advantages of a hobby such as running is that my work — as the work of many nowadays — is what you would call “knowledge work”, with little physical strain, unless you count the muscular imbalances caused by sedentary lifestyle and being in the same position for most of the day. On the other hand, the mental workload is ever increasing and the world seems to become even less sedentary in this area. Stress caused by work is a common occurrence for many.

I will next have a pre-planned three week or so pause of running; supposedly it should do good. My next race will probably be 10K at the Helsinki Spring Marathon on 23 April 2017, unless I end up to signing up to some other event earlier. :)